PUNTA ARENAS – The four crew members of a Brazilian yacht that sank in Antarctica last Saturday have been transported to Punta Arenas. According to information released by the Chilean Navy, the vessel sank in Maxwell Bay. It was probably the result of a massive compression caused by the accumulation of ice around the hull. 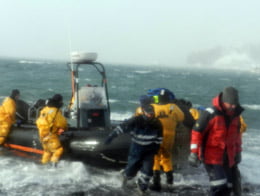 On Wednesday, the crew of the yacht “Mar Sem Fim” (which in English means Endless Sea) was rescued unharmed by the Chilean Navy. The base in Bahia Fildes, in Antarctica, received an emergency call by radio. The captain of the vessel requested assistance and support to evacuate the crew because of bad climate conditions with winds up to 120 kilometers per hour.

The vessel was about 20 meters long and was owned by the Brazilian journalist and entrepreneur João Lara Mesquita. He was making a documentary in the region. In his blog, Mesquita reported the moments of apprehension caused by bad weather, and also the rescue made by the Chilean Navy. On April 5 he wrote:

“Then, with strong winds and high waves, the boat Frei came to us. Our evacuation was epic. Waves of more than 1.5 meters and winds over 40 knots made the boat jump from one side to another, like a bucking bronco. When it got close, each of us … threw ourselves into the arms of three Chilean crew members. Fortunately all went safely.”

According to the report of the Mesquita, the four crew members of “Mar Sem Fim” remained in the Chilean Navy base in Antarctica waiting for the possibility of returning to the yacht. However, on Saturday the vessel sank.

“I woke up after eight o’clock. I just left the bunk when Plinio came from outside, overwhelmed, and hugged me. ‘The boat sank,’ he said. ‘Only the bow is out.’ It was a terrible shock,” Mesquita wrote in his blog on April 8th.

After the yacht sank, the Brazilian Navy issued a statement saying that, “The necessary measures are being taken with support from the Chilean Base to mitigate any environmental damage that may be caused by the wreck.”

Fire in Antarctic Base

On February 25, a fire in the engine room destroyed the Brazilian Antarctic Station “Comandante Ferraz”, the Brazilian military research base in Antarctica. About 60 people were there when the accident occurred. Two Brazilian soldiers were killed and one was injured. The construction of a new base at the site is supposed to begin in 2013.